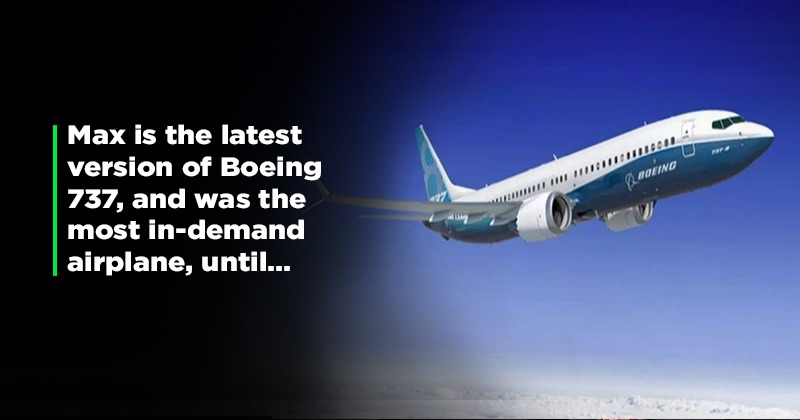 Safe to fly? Or yet another flying coffin?

My first contact with Boeing was when, after an all-Marathi primary school, I was trying to grasp the nuances of English, a foreign language, which then seemed such a waste because the British had left India more than a decade before I was born. My attempts to learn their language were more like childish revenge for all the wrongs they had done in India.

Marathi, my mother tongue, being based on Sanskrit, is quite scientific in its structure, and simple, because what you write is what you speak. No confusing pronunciation differences for similar words or vice versa. And, above all, no silences while pronouncing words, so a childhood joke remains etched in my mind.

An excited child at the airport, seeing a plane take off, shouts: “Boeing, Boeing!”

“Be silent!” The teacher says.

Since then, I have been flying and still fly the 737 NG, as well as its younger sibling, the 737 Max.

The Max is the most modern version of the Boeing 737 which has been flying, in its various versions, since 1967. It is also the most fuel efficient, and was for a while the most requested aircraft…

‘Downfall: A Case Against Boeing’ is a chillingly brutal and technically accurate documentary about the crash and the reasons behind it.

It also documents the corporate culture that attempted to whitewash issues following this accident.

Lion Air had a “spotty” safety record and was, for a time, banned from flying in the US, so there were subtle and not-so-subtle attempts to blame “third party” countries and airlines world” and their pilots.

A former chairman of the US National Transportation Safety Board (NTSB) said: “The airline probably needed to do a better job of training its pilots…”

Boeing reportedly said: “An American pilot would never have found himself in such a situation…”

Boeing’s president has said publicly, “We can’t really comment on the investigation.”

But ultimately, the Company admitted to having possibility incorrect activation of MCAS.

To this, a surprised community of Boeing pilots who flew the new 737 Max aircraft reacted by saying, “What is MCAS? I’ve never heard of it before!”

As I’ve always said about planes, “if something goes wrong, this vehicle can’t be stopped on the side of the road to wait for help”.

So, although you’ve driven your car all your life without ever looking under the hood, we pilots have to learn a lot about the planes we fly. It’s also why switching between planes isn’t as easy as driving a car today and another tomorrow. This involves a lot of ground training and simulator flight, followed by a flight in the new “supervised” cockpit before being cleared to fly on your own.

This whole process takes months of study and millions of rupees.

So in that context, imagine pilots asking, “What is MCAS?” I’ve never heard of it before!”

To everyone’s surprise, Boeing had included MCAS in the pilots’ manuals only under “Abbreviations”. There was no explanation of this system anywhere else in any of the pilots’ manuals, of which, for the record, there are four (FCOM Volume 1, FCOM Volume 2, QRH and FCTM) totaling some 7,000 – yes , seven thousand pages.

We pilots aren’t required to memorize everything, because that would be impossible, but there are a few “memory items” that one “must know” and there are things about aircraft systems that pilots “should know”. After that, you can refer to the books for everything else, as long as you know where to find that information.

So overall, the training and certification process for pilots (and engineers) is solid, well documented, and legally enforced.

Which makes this question even more shocking: “What is MCAS?” I’ve never heard of it before!”

So what is MCAS?

Apparently, according to the bigwigs at Boeing, it was just a minor software tweak that worked in the background and automatically helped the aircraft stay within its maneuvering range.

Let me explain the “maneuver envelope”. I promise, I’ll keep it simple.

Say you’re on a motorcycle. Assuming, of course, that you’re on a new highway (inaugurated just before the election!), you can only drive at engine speed or until the chassis spins out of control. Now imagine yourself on that same road a few years later, and you’re bound to go slow. But you can only go so slow and not slower, otherwise you will lose your balance. Well, between those two speeds is your maneuvering envelope.

But your bike can only move in two dimensions, so for an airplane, add a third dimension of height, and things get interesting and complicated.

That’s why, they said, MCAS was automatic, to make things easier for pilots.

But pilots’ unions in the United States have accused Boeing of withholding vital safety information.

To this, Boeing replied, “We try not to overload crews with unnecessary information.”

The bottom line, they insisted, was that the 737 Max was safe and that “existing procedures” were adequate to handle the situation that caused the Lion Air crash.

Countries around the world grounded the 737 Max plane, prompting public pressure in the United States for President Trump himself to announce the grounding.

But the CEO of Boeing still insisted: “The pilots did not ‘completely’ follow the procedures.”

Now we have “existing procedures” for dealing with engine failures, but if engines were to start failing regularly, surely someone would have to ask, “Why?” »

You do not agree ?

Yet there has been a massive public relations exercise to blame the “poorly trained” pilots of these non-US airlines.

And, I remember, there were attempts to blame it on “cheap” Indian software inside MCAS computers! But that didn’t convince anyone.

After the Max planes were grounded and had to be flown empty, without passengers, to various airports for storage, many “well-trained” American pilots were not keen on flying this plane.

I’ve been in the IAF for 22 years and flew the MiG 21, which the uninformed call the “flying coffin”. But, in all these years and even after that, I have never met a single pilot who refused to fly this plane. My article on the subject highlights this point.

During a congressional hearing in Washington, DC, famed Captain ‘Sully’ Sullenberger said, “We shouldn’t blame the pilots. And we shouldn’t expect pilots to have to compensate for faulty designs…”

Basically, profits trumped safety, albeit briefly, but with dangerous consequences.

I won’t reveal details here with spoilers and highly recommend you watch “Downfall: A Case Against Boeing” yourself.

It will shock you and bring tears to your eyes. Don’t miss it.

What is the future? You ask? Is the Max plane safe?

Boeing engineers modified MCAS, made it less intrusive and kept it under pilot control unlike before.

Additionally, aviation regulators around the world, being “once bitten twice shy”, have mandated ground school and simulator training for pilots.

And airlines trained their pilots and engineers before putting the Max planes back into service.

The documentary, although absolutely true, belongs to history. And industry professionals have learned from this.

The future is safe and fuel efficient.

The writer is a former IAF fighter pilot and now a commercial airline pilot. He is the author of two books and numerous blog articles, available at www.avinashchikte.com