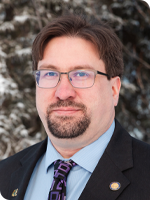 Juneau Senator Jesse Kiehl raised concerns about the availability of funds from the federal government’s State Transportation Improvement Plan, or STIP, to the Highway of the Sea. Kiehl asked committee chairman and sponsor Robert Myers of North Pole about the decision to move the system out of DOT when STIP was a key feature.

Myers cited a few reasons. “The first is that we recognize that the DOT, for multiple reasons, has failed to play with itself. Often the sea route as it is is a bit overlooked and so we wanted to place it a different structure by recognizing that the DOT has not necessarily been the best manager, hence the interest of the bill.”

Additionally, he thinks placing Marine Highway in Commerce will create a different “corporate culture” or environment that could push the new company to be a bit more entrepreneurial than it is currently in Transportation. .

It was later pointed out to Senator Kiehl that under the measure the company could deal directly with the federal government to receive STIP funds.

Under the legislation, current employment contracts would expire and the company would negotiate new employment agreements.

SB 170 was held in committee for additional work.